CINCINNATI -- Zac Taylor was working past midnight during one of the first weeks on the job when the new Cincinnati Bengals coach heard music coming from the weight room. 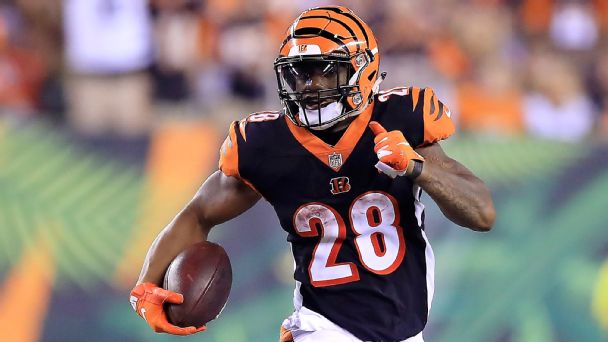 • 5: Games with at least 130 yards from scrimmage, tied for the fifth in the NFL.

"He said, ‘Man, what are you doing up in here?’" Mixon said of the encounter. "I just told him, ‘Putting that work in, getting ready.’"

The third-year running back has spent the offseason preparing for his role in the Bengals’ new offense and what it means for his career.

"I feel like Coach Taylor, he’s going to throw the load on me," Mixon said. "But I gotta be physically and mentally prepared to be able to take it on and do the best job that I can do."

Given Taylor’s background and pedigree, Mixon and the Bengals’ offense are hoping for an even bigger year.

Taylor spent the previous two seasons as an assistant on Sean McVay’s staff with the Los Angeles Rams. In McVay’s first year, the Rams went from worst to first in the NFL in scoring. Running back Todd Gurley also led the league in yards from scrimmage.

This offseason, the Bengals studied how the Rams operated. When Taylor arrived, the Bengals did not have any specific discussions about how the running backs were going to be used differently. But Taylor said, in early conversations, he talked to Mixon about continuing to mature and developing into a team leader who will be counted on.

"It's really just taking the next step," Taylor said.

Last season, Mixon racked up 1,464 yards from scrimmage and became more productive toward the end of the season. Of his 1,168 rushing yards, 584 of those came between Weeks 12 and 17. Only the Titans' Derrick Henry had more during that span, according to ESPN Stats & Information.

When starting quarterback Andy Dalton was placed on injured reserve with a thumb injury and missed the last five games of the season, Mixon remained productive. He averaged 5.2 yards per carry during that span, up from his season average of 4.9.

Dalton said Mixon has paid attention to the small details that will help him maximize his talents.

"He can do so much," Dalton said. "I think for him the biggest thing is to make sure he knows this offense in and out and make sure he’s on the same page with each scheme that we’re trying to do."

To celebrate 100 years of pro football, Peyton Manning travels the country to see the people and places that made the NFL the NFL.
Watch on ESPN+ » More »

Mixon averaged 16.9 carries per game and accounted for 66% of the Bengals' total carries as he developed into the focal point of the rushing attack. Even with a strong position group that features veteran Giovani Bernard and rookies Trayveon Williams and Rodney Anderson, that trend appears likely to continue.

In preparation for a likely heavy workload, Mixon spent the offseason working on improving his conditioning. During training camp, he’s balanced keeping his body fresh while making sure he’s in shape for a 16-game season.

"As long as I’m in great condition, I feel like I’ll thrive in this offense," Mixon said. "I feel like that’s for everybody."

That’s partially why Taylor found Mixon working out in the early morning during the offseason. Mixon and his teammates are fully aware of what the offense looks like when everything is clicking. And Mixon is as excited as anyone about the potential.

"The sky’s the limit for me and the offense -- really, for everybody," Mixon said.